Son of Jean-Joseph and Faustine Rossier, farmers, Maurice studied at the college of St-Maurice (1925-31), then entered the novitiate of the Great-Saint-Bernard in 1931; he became a regular canon in 1935. He joined his brothers who had left to found a hospice in Tibet and arrived in 1936 at the mission in the Tibetan marches of Yunnan. Ordained a priest in Hanoi (Vietnam) in 1938, he directed the minor seminary intended to train the indigenous clergy from 1938 to 1945. Appointed parish priest of Yerkalo, the only post established in independent Tibet, in June 1945, he was faced with the hostility of the lamas and expelled in January 1946. In vain, he sought support from the diplomatic representatives of the Western nations in Nanking, and from the Apostolic Nuncio.

He finally conceived the project of going to plead his cause with the Dalai Lama. With the consent of his superiors, he joined a caravan bound for Lhasa in July 1949. Halfway there, he was forced to retrace his steps. He was shot with his Tibetan servant at the Choula Pass on the Sino-Tibetan border. His body lies in the garden of the Yerkalo mission.

Beatification
The cause of beatification was opened at the instigation of his mission companion, Provost Angelin Lovey, with a diocesan informative process in Sion (1953-1963), inaugurated by Bishop Nestor Adam. Pope John Paul II recognised Maurice Tornay as a martyr of the faith in July 1992 and proceeded to his beatification on 16 May 1993.

On the Calendar
At the time of the beatification of the Servant of God Maurice Tornay, Pope John Paul II fixed the liturgical feast of the new Blessed on 12 August. Every year on this date, many friends of the Blessed come to La Rosière, Blessed Maurice's birthplace, to celebrate the divine office recalling the martyrdom of the canon on 11 August 1949. To mark its 300th anniversary, the chapel was endowed in 1994 with four stained glass windows recalling the life of the Blessed.

Chapel and permanent exhibition at the church in Orsières
Blessed Maurice received the sacraments of Christian initiation in the parish church of Orsières. At the top of the church in Orsières, on the left, a magnificent new chapel dedicated to Blessed Maurice Tornay was inaugurated on Sunday 12 September 2021 in the presence of His Grace Jean-Marie Lovey, Bishop of Sion. As you enter through the door on the west side (the parish church), you will discover a series of paintings depicting the different stages of the Blessed's life.

Discover the new chapel dedicated to Blessed Maurice Tornay in the church of Orsières.
It was inaugurated on 12 September 2021! 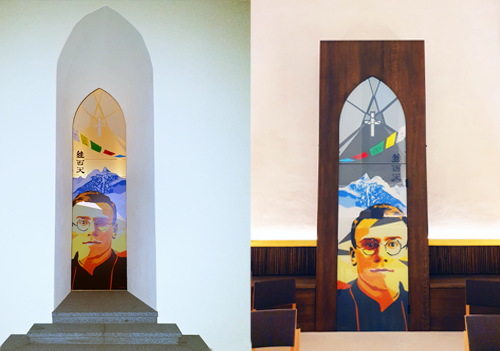